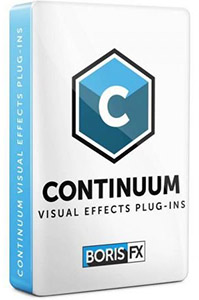 Boris FX Continuum Complete 2020 is the latest major release of the post-production industry’s most comprehensive plugin collection. Key new features include 4 effects, 6 transitions, and nearly 100 professionally-designed presets. You’ll work even more efficiently with Particle Illusion and Title Studio’s new functionality and updated interfaces. And tracking and masking takes seconds with the addition of an Area Brush tool to integrated Mocha.

Need to add a reflection to an element or titles? The Reflection effect instantly generates a planar reflection using a filtered source image. Reflections can be easily tweaked with options for blurring, shimmering, scaling, repositioning, and independent animation. Includes a built-in animatable 3D camera system to fill the gap if your host application doesn’t offer native cameras. After Effects artists have the option to use AE’s native cameras.

Throw a shadow onto your shot! The Cast Shadow effect generates true 3D shadows using an integrated point or parallel light source positioned in 3D space. Includes options to control the intensity, color, and length of a shadow blur, plus a ripple feature if you’re casting a shadow over water. Use the built-in animatable 3D camera system to reposition the source as needed. After Effects artists have the option to use AE’s native cameras and lights.

Curl is a warp effect that’s perfect for creating heat haze, underwater distortions, and smoky effects. Users can easily tweak the number, speed, and angle of curls. Includes the integrated Beat Reactor to make your effect bounce to music.

Particle Illusion’s fast and easy-to-use real-time particle and motion graphics generator gets a major update with new functionality and UI improvements. Highlights include:

Title Studio’s Cinema 4D integration results in the best and most accurate renders of any 3D model plugin for NLE and compositing systems — and now includes more shaders and materials than ever before. Highlights include:

* Clean up existing .lic if there is any from another release!