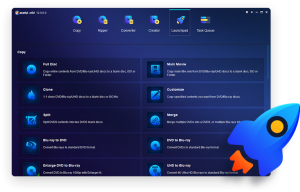 DVDFab is an all-in-one DVD ripping/decrypting/burning software. In just one or two steps, you can copy DVDs to DVDR/PSP and even iPod. For such a powerful package, it only requires 1.3MB of your harddrive, so it’s not bulky like similar packages.

DVD protection is advancing at an ever increasing rate but unfortunately for the manufacturers, so are the ripping programs. If you’ve ever had problems copying one of your favorite DVDs then DVDFab could be what you’ve been looking for. It has proved popular a hit with thousands of DLPure users so far and there seems little prospect of its popularity waning.

The DVDFab conversion process couldn’t be easier. There are 5 DVD to DVD copy modes available – Full Disc, Main Movie, Split, Customize and Clone. In Full Disc mode, all movies, menus and trailers are copied to a DVD in one click. In Main Movie mode, only the movie is copied with your specified audio. In Split mode, you can copy a DVD-9 onto two DVD-5 discs but also preserve the original menus on both discs. According to the DVDFab developers, this rare feature is ideal for TV series on DVD.

DVDFab’s handy Customize mode allows you to personalize your DVDs by recording such things as only your favorite scenes, removing adverts or selecting only certain audio tracks. Finally, Clone allows you to make exact 1:1 bit-to-bit copies or even copy games disks such as PS2 DVD’s. There is also a DVD to Mobile option so you can watch your favorite films on your iPod or other handheld device. Formats available on DVDFab include MPEG-4, DivX, XVID and Mp4.

DVDFab is a tough cookie – even disks that refuse to be copied with other programs can usually be cracked. The customize option allows you to get rid of files that stand in your way and just rip the actual movie. It can also help in recovering scratched or dirty disks that don’t play properly in your DVD player anymore. Ripping speed is remarkably fast with DVDFab – depending on the size of disk, you can record a new one in less than 10 minutes, although the average time is around 30 minutes.

One of the minor drawbacks to DVDFab is that the heavy processing power needed to rip a disk often results in crashes. This will be less of a problem on more powerful machines but on machines with old processors, using DVDFab may become impractical. Many user forums are however full of praise for DVDFab claiming that it can rip more disks and, what’s more, faster than comparable products such as DVD Shrink or ShrinkTo5.

Everybody will appreciate the simplicity and power of DVDFab, a rip-roaring DVD ripper..